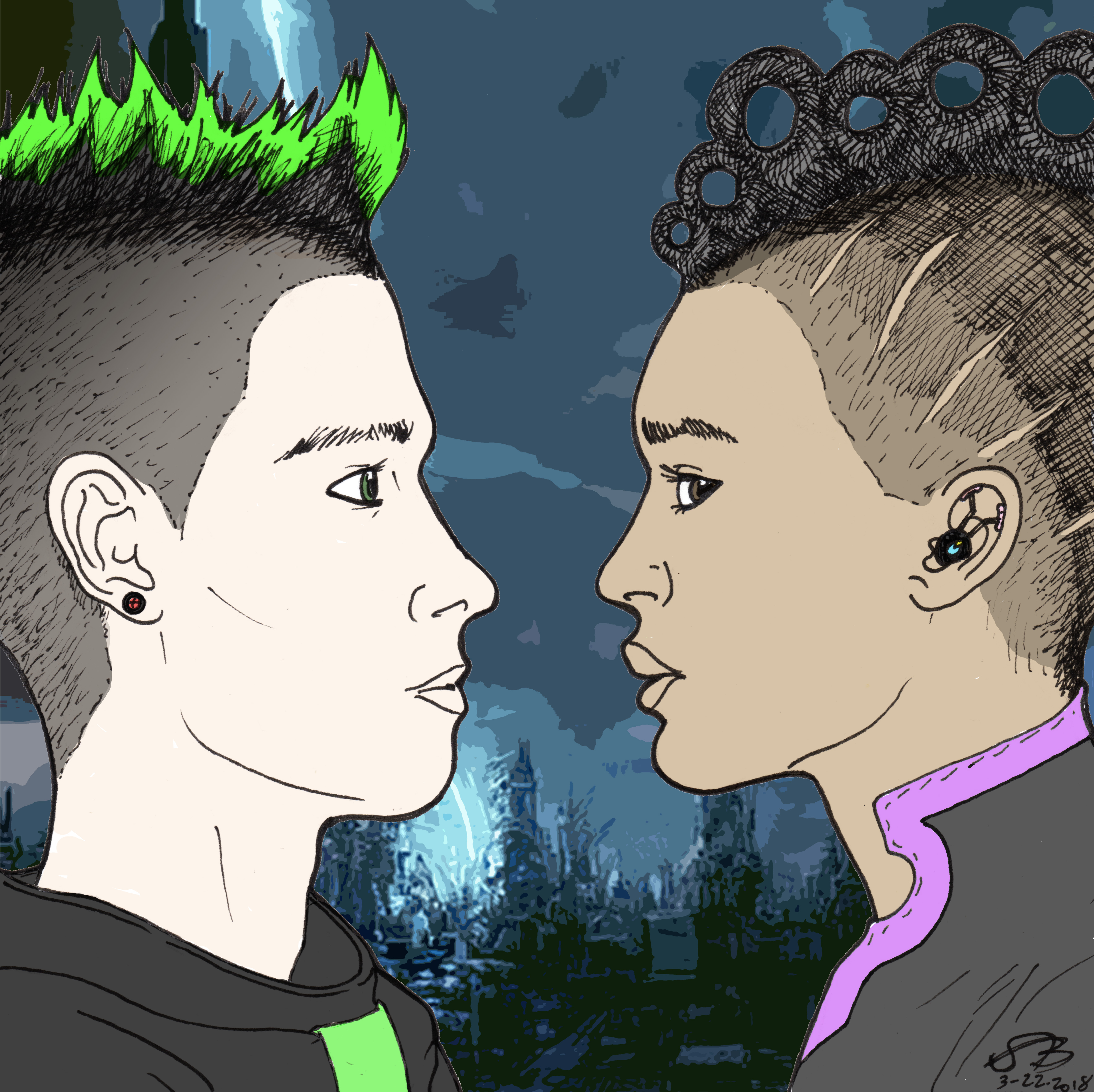 “Welcome to Reverie” is a series of short stories that happen in the worlds of Trystin Bailey’s YA Fantasy book series, Reverie.  You don’t need to read Reverie Book 1 to enjoy the story, but it definitely adds to the fun.

I did it. I told Sim I love her. And she said it back! I just- I’ve been talking about it for so long and now that it’s happened I’m so zzagging happy!

I just upgraded the encryption level for my own peace of mind, hence having to restart my log. I mean, after everything that’s been going on, can you blame me? Nexis’ sanctioned public news outlets continue parading lies as truth, but I’ve started getting my information from Shadowsource. It’s honestly the only reliable thing in this world now.

There was an explosion down in Industry Plaza. Amara was there tinkering with some friends and I caught it on her live-feed. She didn’t come into school today and the authorities are pretending nothing’s wrong. Thank the Core that Shadowsource is looking into this.

Zzag. Right. I told Kyler I love him today. I had so much on my mind and it just came out. He’s nice and everything, but, ugh. Why does life always have to be so difficult?

Sorry if I’m a little all over the place. Sim was kind of distant today. No, not kind of. Completely. I mean, it’s one of the things I love about her honestly. She never plays games. Never puts on a show. In every moment she’s her authentic self and sometimes that self just wants to be left alone. She did mention something about an explosion, but I couldn’t find anything on the Net so I don’t know.

It’s fine. I’m fine. It’s just that we said the words, you know? And then to follow it up with this? My psych app rates my insecurity well above average right now, but how else am I supposed to feel when the girl I love is so intelligent and beautiful and mature and curious and then I’m- I don’t know. She hasn’t viewed any of my chats.

I guess I’m just worried about her.

I finally found the strength to stop by Amara’s. Well, kind of. There was a sentry bot buzzing around her apartment door. A new model, I think. Weaponized. I don’t think it saw me, but I watched from around the corner long enough to see the neighbor from across the hall get home. The bot asked him if he had any information on Amara.

“Amara Hajjar is under arrest for conspiring against Nexis. She must be obtained for questioning.” That’s what it said in that soulless, metallic voice.

I came home and said nothing to the ‘rents. They’d probably turn me in if they knew what I was up to.

I got about a million chats from Kyler. I told him that I’m okay. He called me immediately and we talked for a bit.

He’s the only person in the world who makes me feel like it’s safe to cry.

They’re here! Sim’s been feeling down for a while so I bought her a pair of the new SpaceGlide 4000s from Bezzle’s. I dunno. I had to do something and I think she mentioned that she liked them this one time.

We went on a date last night. It was…fine. She was on the Net basically the whole time. Like, I could see her eyes moving back and forth like she was reading something. Then the little shifts in her lip like she was chatting someone. I wanted to ask who she was talking to, but I guess I was terrified that I wouldn’t like the answer.

Core knows I’m trying to be cool about all of this. It’s fine.

I did it. I chatted Shadowsource what I saw at Amara’s. And they responded!

It turns out that this isn’t the first time something like this has happened at Industrial Plaza. Not even close. And every zzagging time, anyone who happens to be around to see anything strange zzagging disappears.

All I know is that this tragedy has brought me to Shadowsource. I finally feel like I’ve found a group of people who understand me. People who want to make Futara a better place. Maybe if I can gain their trust- if I can prove myself -they’ll let be one of them.

Sim just stopped by unannounced. I was excited at first, but then…then I saw the look in her eyes. They were intense and tired and, I think, terrified.

She was breathing heavily and I took her to my room. She said she couldn’t stay long and she reached into her backpack and pulled out… She pulled out a laser blaster! She pulled it out and sat it down next to me. A tear rolled down her face then and she said, “To protect yourself. Say nothing to anyone. Please. I can’t lose you.”

And then she ran out of my room and out of my apartment. I was so shocked by the whole thing that by the time I was outside she was gone.

I have my mission. Tonight I will meet with Designates Sixty-Four and Thirteen in Central Square and we’ll go on a fact-finding excursion in Industrial Plaza. We’ll be disguised as tinkers, just walking the streets, looking for scraps.

This is the beginning of a more meaningful life.

I haven’t heard from her in days. Like she said, I haven’t told anyone anything. And it’s zzagging killing me.

So I have to do something, you know? I just do.

When she was in my room and in such a hurry, neither of us noticed the papers that fell out of her backpack when she was removing the gun. There were scribbles on it. A badly drawn map of Industrial Plaza. And something called “Shadowsource.” It turns out that they’re some sick conspiracy cult that manipulates teens into committing crimes against the Nexis. It looks like she’d been trying to use comms signals to locate their base of operations.

Sim…what was she thinking? Now I get why she didn’t want me to talk to anyone. Shadowsource allegedly has spies everywhere.

Begin recording: The date is April 4th, 4025. I think. My name is Simmerel Taylor, 3rd year student at the Calico Jones Secondary School, currently held captive by Nexis’ sentinels in what we believe to be the southeast quadrant of Industrial Plaza. Designate Thirteen was able to repair one of our comms devices. Sixty-Four is sure there’s a way out. I, honestly, don’t see it. We’re injured, hungry, and sadly the bots came on us so fast there we weren’t able to get any intel on what Nexis has been up to down here. If by some miracle we get out of this we’ll try again. If not, keep fighting the machine.  Even though it’s only been a short time, I’m honored to have worked with you, Shadowsou-